What is it about Santa Maria de Montserrat Abbey that when our friends learned that our Western Mediterranean Cruise was stopping at Barcelona, they told us to make sure we visit it? The “must-visit” reminder piqued our interest. So we decided to find out for ourselves what our friends recommended as one of the best day tours from Barcelona.

Montserrat is a multi-peaked mountain range near Barcelona, in Catalonia, Spain. It means “saw mountain” in Catalan, describing its peculiar aspect with a multitude of rock formations, which are visible from a great distance.

Our cruise offered an optional five-hour tour of Santa Maria de Montserrat Abbey in the morning, and an included panoramic tour of Barcelona city in the afternoon. We figured this would allow us to optimize the full day available before we disembark the following morning.

Scenic Drive to Montserrat – And Much More

The early morning bus ride to Montserrat took about two hours. It was rush hour, but we were spared of the traffic since we headed out of the city. Negotiating the freeway, we can’t help but notice the congestion on the other side. Just like any major metropolis, many people live in the suburbs and commute to the city to work and do business.

Along the way, we passed by Montjuic, and we saw winding paths and terraced niches along the steep slopes of the hillside. It is a Roman Catholic cemetery, which attracts visitors because of its beautiful layout, views and parks within.

During our two-hour trip, our guide gave us an overview of the city of Barcelona and the region of Catalonia. Before we left for the cruise, we did some research about the ongoing protests in the city that we have seen in the news. We wanted to make sure we are fully aware of the situation and potential risks if any.

We got a better understanding of the issues and the latest updates from our knowledgeable tour guide, which greatly assuaged whatever fears we had. We also learned about the history of the protests, and the difference between the Spanish and Catalan languages.

When we were planning the trip, we told ourselves that it would be easy to get by in Barcelona as we were familiar with a lot of Spanish words, having come from a country that was ruled by Spain for three centuries.

Spanish was the official language of the Philippines from the late 16th century, through the late 18th century, and remained co-official, along with English. However, we soon realized that there was quite a difference between the Spanish and Catalan words, although our tour guide was very fluent in both languages.

After a two-hour journey through the freeway, we arrived at the town of Monistrol de Montserrat. We then boarded the Cremallera, a green train that runs to the location of the Benedictine Abbey. History has it that people in the past would hike up the mountain to reach the Abbey as part of their pilgrimage.

As we were riding on the train, we had a sweeping view of the scenic landscape below. At this time, our tour guide took the opportunity to narrate to us the legend of Montserrat, the origin of the Black Madonna, and how Montserrat survived the various wars, which destroyed most of Europe during the Napoleonic wars and the 2nd World War.

Visitors usually have three main reasons for visiting Montserrat – the architecture of the buildings, the Black Madonna, and the masses and choral concerts.

As we reached the main square, we cannot help but be awed by the magnificence of the mountain, the rocks on its side, the Abbey and the various buildings in the area. Picture-perfect views! 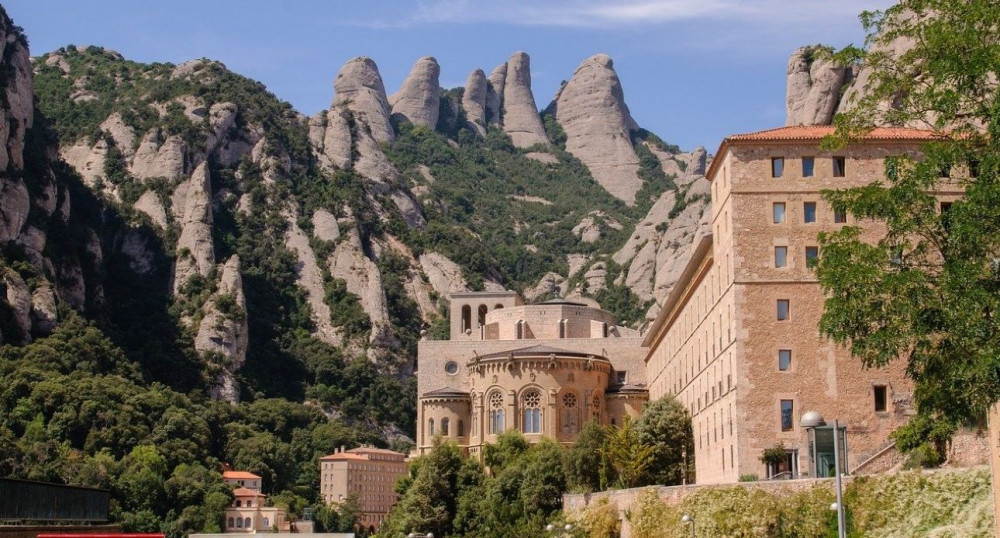 The Abbey is a Gothic structure but also uses Renaissance shapes and traditional Catalan architecture. The Napoleonic war in the early 1800s severely damaged the Abbey such that the current building is a reconstruction done at the end of the 19th century.

The Atrium of the Basilica is an open-roofed courtyard area that sits directly in front of the church. There was already a long queue at the side of the church that leads to the Black Madonna. We initially wanted to queue up, but we reckoned it would take at least an hour.

We decided instead to go inside the church where we can see the Black Madonna from a distance. It gave us more time to explore the surrounding areas and take in the breathtaking views. 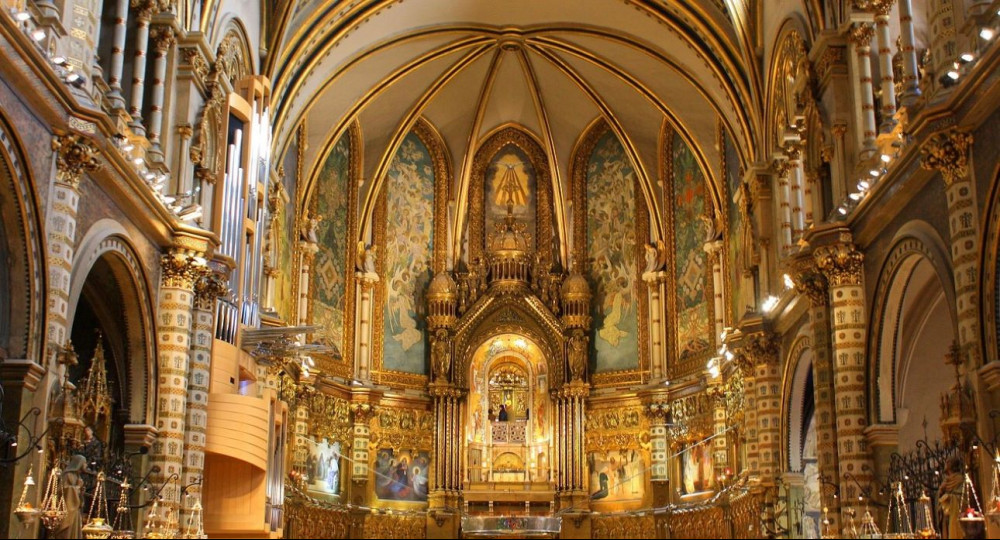 The timing of our visit also did not allow us to witness the performance of their boys’ choir, which we understood to be excellent and internationally recognized. If you are interested in hearing them, make sure to check their website for schedules. 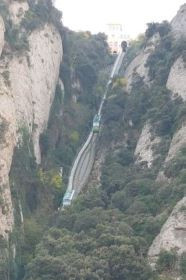 With limited time left before the drive back to the ship, our strategy was to divide and conquer. Zen headed to the museum, which housed an outstanding selection of the artistic and archaeological heritage of the thousand-year-old Abbey; I explored the shops in the square. The strategy worked, and we made it to the bus on time.

The Abbey is not situated at the peak of the mountain. If you have the time, you can take the Sant Joan Funicular that will take you to the top, offering a spectacular panoramic view of Montserrat, 1,000 m above sea level.

The viewpoint provides a bird’s-eye view of the monastery as well as spectacular views of the surrounding area and the Pyrenees. If you have an adventurous streak, you can hike up to the summit from the base. But it’s no mean feat!

The Trip Back to Barcelona

When we were on the bus, the tour guide asked who among us had to catch the next tour at 1:30 pm. While we were slightly delayed leaving Montserrat, she assured everyone that she had called the ship and that our bus should be able to arrive in time for those to join the afternoon tour.

We were supposed to be on that afternoon tour, which included the visit to the La Sagrada Familia. But we decided to cancel our reservation and planned to visit it the following day. Instead, we spent the rest of the afternoon exploring Las Ramblas on our own, just enough to get a sneak peek. We headed back early to our ship for our last dinner at one of its fine dining restaurants.

Felt Blessed with the Opportunity!

When visiting Barcelona, the trip to Santa Maria de Montserrat is an opportunity that cannot be missed. It is a breathtaking experience all the way through – from scenic mountain views, its rich history, the funicular (train) ride, the museum and the shops.

Montserrat is a bit more touristy compared to another Benedictine monastery (Gottweig) near Krems in Lower Austria that we visited earlier on a separate trip. But having the opportunity to experience it, albeit short, was more than enough for us to feel blessed.

Have you had the chance to visit Montserrat while in Barcelona? Please let us know your thoughts and stories about this incredible place by leaving your comments below. If you enjoyed reading our post, please share our story with your family and friends.

How To Visit Sagrada Familia

How to Change a Perspective – Go Travel and Be Transformed