What is in Gottweig Abbey?

What is in Gottweig Abbey? You’ll be surprised – there are lots to see and explore! We had a chance to visit this historic abbey during the Danube River Cruise that we took a couple of years ago; a uniquely relaxing and enriching experience for both body and soul.

Exploring What is in Gottweig Abbey

Often referred to as the Austrian Montecassino, Gottweig Abbey stands on a hill and provides a panoramic view of the Danube and Wachau valleys. This abbey and the Melk abbey not far away sit on the cultural landscape of Wachau, one of Unesco World Heritage sites.

Periods of decline and prosperity characterized the history of Gottweig, as was the case for several churches and monasteries in the Wachau valley. During the mid-1500s, it did not even have an abbot nor a single monk left at one point.

Closed during the Reformation, being destroyed almost entirely by fire in 1580, sieged and destroyed several times, transformed as a prisoner-of-war camp during World War II, and devastated after the war with the Soviets, the abbey now lives again following repeated restorations over several decades.

This 900-year-old Benedictine abbey, where monks work and worship, now stands as a masterpiece of Baroque architecture, with its economic support provided by its forestry business, tourism, agriculture, and more. A center of learning, it possesses a library of well over a hundred thousand books and valuable collections of coins, engravings, antiquities, and natural history.

The entire abbey awed us with its vast complex, surrounded by three corner towers. While the original plan outlined four towers, the actual build only completed three. Its church, which originated as a Romanesque church in the 11th century, stands as the most dominant building in the complex. However, after the reconstruction of the façade, the 18th-century church got its current Baroque appearance.

A neoclassical portal welcomed us to this rosy-hued church and allowed us to admire its colorful and ornate interior. We were wonderstruck by the church’s beauty and the panoramic view of the valley from the abbey’s grounds!

Our next stop was the abbey’s museum, where the host welcomed us at the cellar entrance with a glass of sparkling apricot wine. A private viewing of a short film about monastic life and how the modern monastery is being run today followed.

The abbey’s museum host vividly narrated its 900-year history as a center of religious life and its role as a monastic retreat. We also got to view a sampling of the museum’s rich graphic collections consisting of about 10,000 objects, including 5,000 music manuscripts, 2,500 music prints, 500 writings on music, more than 600 letters from musicians and music scholars, textbooks, music magazines, and historical musical instruments. The Abbey Library now boasts of about 145,000 volumes focusing on Theology and Philosophy, and History. 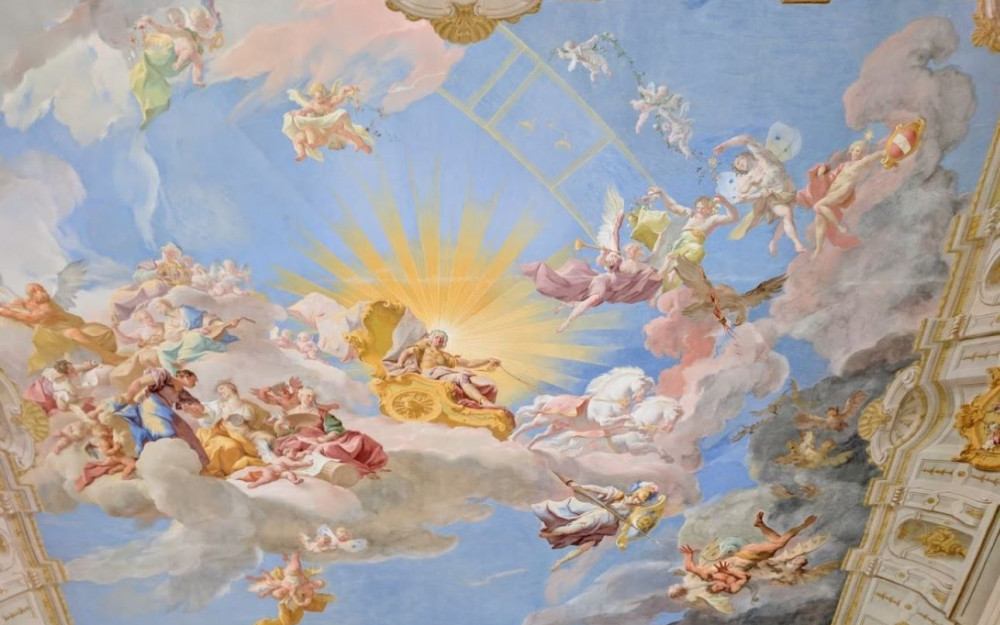 The museum extended over three floors, showcasing exhibitions about the abbey’s history and the surrounding area, art pieces, and music collections. To proceed to the second floor, we had to climb the “Kaiser staircase,” said to be the biggest and the most beautiful Baroque staircase in Austria. The climb proved to be one of the highlights of our whole Gottweig Abbey experience. As we ascended the stairs, we marveled at the celestial view of the ceiling fresco.

The Garden and its Produce

After indulging our senses in the abbey’s interior beauty, our host ushered us out to the garden. We learned that the apricot trees in the garden yield the apricot wine that we earlier enjoyed.

We wanted to bring home the experience we enjoyed, so we headed to the abbey’s shop and bought the same sparkling wine we had and a bottle of jam. Food never fails to bring us back to places we’ve visited.

If you are looking for a serene ambiance while enjoying art and architecture and learning a bit of history with a refreshing wine, a Gottweig Abbey visit is highly recommended. We were fortunate to have it as part of our Viking river cruise on the Danube. Check out the video below from Viking for a sneak peek of the abbey experience.

Other Places to Explore in the Area

If staying longer in the area, you can venture out to nearby cities in the region. Below are some places you may want to consider:

Wachau Valley, a UNESCO World Heritage Site, represents a scenic stretch of the Danube Valley between Melk and Krems, a captivating landscape of high visual quality.

We got to see and enjoy the Wachau Valley from our riverboat as it cruised through this portion of the Danube River. You can also ride on an electric bike (e-bike) and follow the flat bicycle trails along the Danube and enjoy the breathtaking landscape of vine-clad hillsides and green meadows. An e-bike lets you choose between pedaling or have a comfortable ride by getting assistance from a small motor.

The Danube Cycle Path, a revolutionary international bicycle trail, begins in Passau, Germany, and follows the river’s course to the Danube Delta in Romania. The route through Austria is considered one of Europe’s top cycling experiences for its sweeping vistas.

This city of around 24,000 inhabitants in Lower Austria’s federal state sits approximately 70 kilometers from Vienna and ranks the fifth largest. The existence of its statute qualifies it as both a municipality and a district.

The fame of this city on the banks of the river Danube centers on the cobblestone streets of its Old Town (Altstadt), which have remained virtually unchanged since the 18th century. The Old Town consists of two sections, the Lower Old Town serving as an attractive pedestrian zone, and the upper Old Town up a steep hill housing the Renaissance Rathaus and one of the oldest parish churches in this part of Austria.

The charming Austrian town of Melk along the River Danube of Vienna serves as an inviting proposition for any visitor either on a day trip from Vienna or as part of a Danube River Cruise.

Its fame centers on the 11th-century Melk Abbey, a vast monastery built high above the town and gold statuary on its domed Abbey Church. You can also view the Marmorsaal, a baroque hall with a ceiling fresco and red marble walls.

A stroll through the town’s streets provides you the opportunity to admire the beautiful architecture or sights such as the old post office, a house at the rock, and the Rathausplatz. Old town walls and their round towers allure all visitors of Melk.

Our day excursion allowed us to discover what is in Gottweig Abbey – a unique history and art experience and enrichment of our spiritual knowledge in a tranquil setting. Had we have more time, we could also have explored other options close by.

We highly recommend taking advantage of a similar opportunity if you are in the area one day – whether as part of a Danube river cruise, a road trip, or a getaway vacation to this part of Europe. If our experience enticed you to plan a trip to this area or have already visited this place and want to refresh your memory of your experience, you might want to check out the available resources below.

Our Viking Romantic Danube River Cruise we took three years ago provided us a chance to discover what’s in Salzburg, Austria. As fans of the movie The Sound of Music, we did not miss the opportunity to head out to nearby Salzburg when our cruise stopped by Passau. If you love nature and classical music,...

Slow down to enjoy travel and make your journey more meaningful and memorable.  Slow travel brings us back to some of the reasons why travel is important. What is Slow Travel Slow travel helps you embrace a mindset that erases the feeling of travel fatigue so that you can fully immerse yourself in your experiences,...

Slow down to enjoy travel and make your journey more meaningful and memorable.  Slow travel brings us back to some of the reasons why travel is important. What is Slow Travel Slow travel helps you embrace a mindset that erases the feeling of travel fatigue so that you can fully...

Our Viking Romantic Danube River Cruise we took three years ago provided us a chance to discover what’s in Salzburg, Austria. As fans of the movie The Sound of Music, we did not miss the opportunity to head out to nearby Salzburg when our cruise stopped by Passau. If you...